is an E-road between Olderfjord and North Cape in northern Norway. The road is 129 km long.


The northernmost part of the road is available only to convoys, driving at fixed times, during the winter months.

E69 is the northernmost road in the world with connections to a major international road network. Roads further north in locations including Svalbard and Greenland are isolated and short.

In the first version of the current E-road network established in 1975, E69 was a longer and completely different road from Warsaw to Wiener Neustadt through Piotrków, Katowice, Český Těšín, Žilina, Trenčín, Piešťany and Bratislava. This route is now mostly part of E75, and that time, the E75 went through Kraków and Banská Bystrica, which is now part of E77.

It was later modified south from Mattersburg. Instead of Wiener Neustadt, it went further to south touching Oberpullendorf and Oberwart following the Austrian route 50, ending in E66.

This version was never signposted along roads, instead a modified version was implemented with E75 on this route. In the old version E-road network established in 1950,
E69 went between Ålesund and Dombås in Norway, now E136.

The Norwegian E69 was planned in the 1930s, particularly after a public meeting in Honningsvåg in 1934, as a means of drawing tourism to offset the loss of lucrative fishing rights.

A ferry line was set up between Russenes near Olderfjord and Honningsvåg, a distance of around 70 kilometres (43 mi; 38 nmi). The road between Honningsvåg and North Cape was opened in 1956.

E69 was given its current route number in 1992. Before that, the road was number 95 in Norway. Since then, it has no distinct national number. The North Cape Tunnel and the Honningsvåg Tunnel were opened in 1999, thereby eliminating the ferry.

From then to 29 June 2012, the North Cape Tunnel and adjacent tunnels were tolled.[6]

The Skarvberg tunnel [no] near the southern end of E69 opened in 1968 and is a bottleneck. It is partly only 4.7 metres (15 ft) wide, so wide vehicles cannot use it at the same time in opposite directions,

and there is rockslide danger in the area. Therefore, a new tunnel is to be built in 2018–2021,
which also will shorten the route by 2 km. 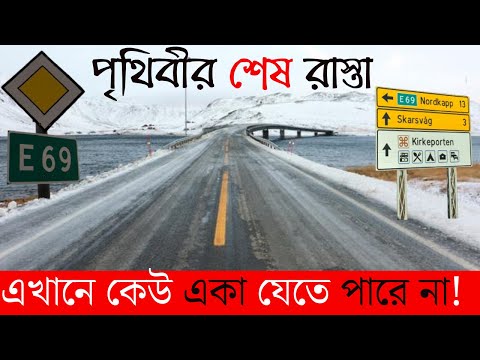